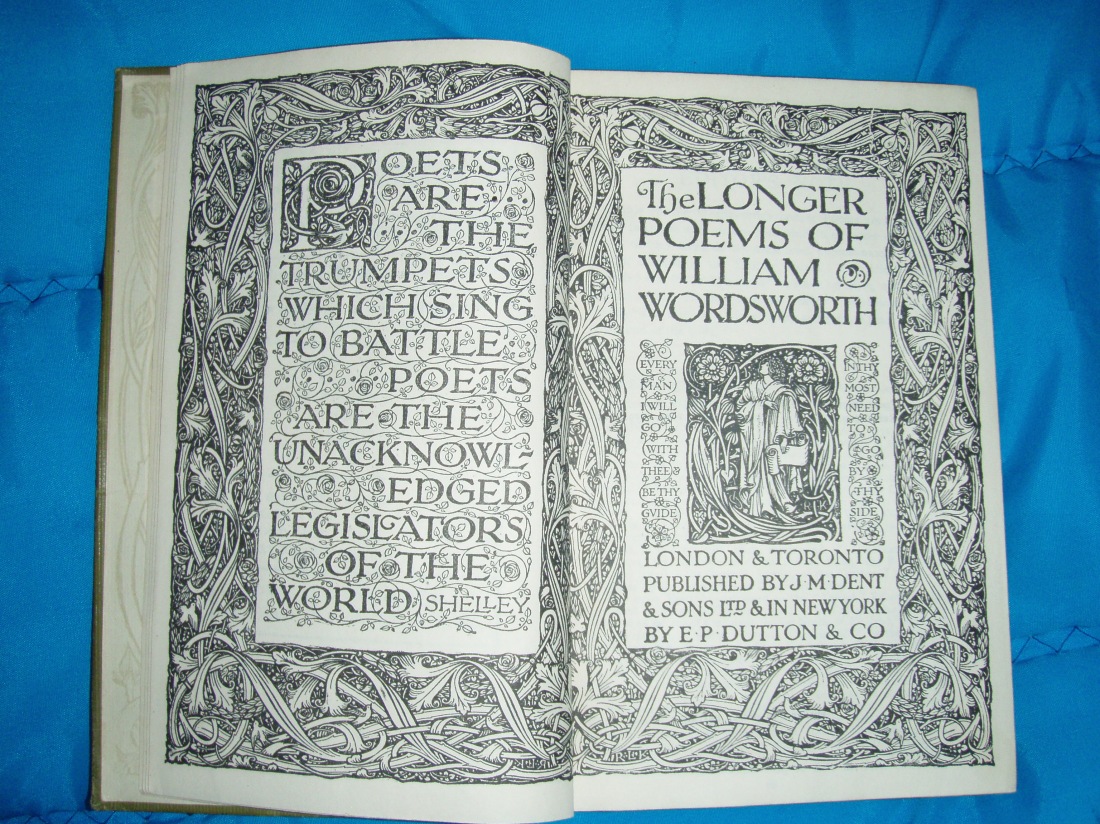 I’ve been trying to write a long poem in tribute to my father who was a Wordsworth enthusiast. Needless to say, I have found it very difficult and don’t know what to make of my attempt. This is the beginning. The good thing about a blog is you can float ideas to try out. This is not a finished draft; merely a first attempt!

Is it for this an un-bridged chasm yawned between us?

I know I turned away from your literary conversations

and when you wrote your annotations, but be sure, that now

I venerate your Everyman hardback. Now you’re no longer

able to converse with Wordsworth or with me I’ll try

by gluing the loose spine and placing your book on my altar.

were certainly not ornamental so I wonder if you smiled

when you followed De Quincey’s meandering steps. Did you

chuckle when you read that beside a tall clergyman

like a beetle, even edging his companions off the highway?

Once you attached a grapnel around his eyes and underscored:

there was a light as if radiating from some spiritual world

the light that never was on land or sea.

I’m in concord here and throw a rope to the other side, hoping

I can narrow the distance. I’m following a convoluted path

here and now but recognise your footprints: your battles

en route and with the dimming light. Some footholds

afford some security and I can rest awhile. I travel on

and glimpse a finger-post pointing to a deep ravine;

I hope there’s a permissive path beyond the gorse.

I was a toddler trailing clouds of glory when you read

about your hero’s legs. Like his, yours conquered many a peak

and cut a path through scrub and gorse. Years later I came to myself

in a dark wood: I knew I had lost the way. If only I had

talked to you about Dante’s Labyrinthine Way!

Your furrow then was straight and certain, a bulwark against

the distractions of the world. You underlined in pencil;

he was guarded from too early intercourse with the deformities

of crowded life. In the ensuing years your naming of parts

obscured both our paths. You named the poetic faculty

as the highest good. I find your longer sentences difficult

to follow even with a magnifying glass. You turned his Ode

around and wrote horizontally. There is little that’s fugitive

but his spots of time became your asterisks; his radical ideas

I lay down my words in the shadow of yours;

your longer passages before they fade from view. My hands

touch the edge of both our worlds on this cold day.

A double underlining for the powers of reason and nature

thus reciprocally teacher and taught – you can be my guide

even at this late date. I know that, a voice without imagination

cannot be heard. Is it for this that I am searching for the signs?

3 thoughts on “To My Father”