Mental Health has become more prominent on the socio-political agenda in recent years so it feels the right time to write this more personal blog.

Boarding School Survival Syndrome is a recognised psychological condition rarely talked about. It is similar in some ways to Post Traumatic Stress Diagnosis. Here is one comment about it:

[Children] who were sent away to boarding school from their family homes often learnt to endure unacceptably brutal interpersonal practices … When these kinds of trauma emerge in adulthood in the form of stress related disease, inability to sustain meaningful intimate sexual relationships, and mental and emotional breakdowns, adults often don’t even know how to begin to acknowledge their long-hidden pain to themselves, let alone talk to someone else (such as their medical practitioner) about their suffering. This, as we know from the psychological research evidence, often leads to further psychosomatic difficulties in terms of overworking to the point of burnout, multiple serious health problems, and drug and alcohol misuse.”

And, to reiterate some of the common symptoms:

Just as not all war combat personnel will experience PTSD not all ex-boarders will experience these symptoms to the extent that their lives are seriously impacted. However, even some of those who don’t have explicit symptoms may well have buried the hurt so deep within themselves that neurosis will possibly surface eventually.

It was not until my late thirties that I recognised, or acknowledged, I had depression and not until much later that I really made the link between my going to a boarding school and my mental ill-health. You are lucky in the UK(and probably financially well-off) if you manage to get psychotherapy; I had to deal with the trauma by myself.

There was no pastoral care, or what today we call safeguarding, at the school I attended from age 12-19yrs. Some of the teachers were sadistic and psychological abuse was common.

I did these paintings when I was 72 and they ‘process’ the emotional damage in a sequence. The first one shows a boy alone – this is the crucial point; on no account did you let on that you were homesick, or sad, to others. It is even the case that you didn’t let on to yourself that you were sad or stressed! 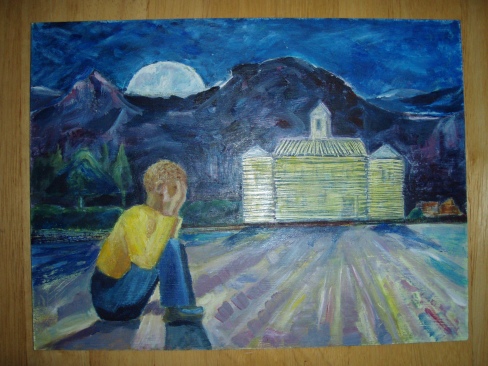 The second shows the anguish and feelings of abandonment: again completely private and suppressed. I was influenced by Munch’s Scream when creating the main figure in the composition and in painting the background.

The next blog will show the final two paintings and conclude the description.

I did an online course about Plato and one of the assignments was to rewrite part of a dialogue where Socrates is asking Euthyphro what justice and piety are. As usual. Plato makes Socrates’ debating partner look a bit dim so I have redressed the balance. ‘Love’ in Socrates’ philosophy is ‘love of knowledge’ as well as love in relationships.

SOCRATES: As it is, I know well enough that you think you have true knowledge of what’s holy and good and what is not. Tell me, then, most worthy Euthyphro, and don’t conceal what you think it is.

EUTHYPHRO: Well, dear Socrates, as you know there are the four virtues; justice, prudence, courage and wisdom. You yourself have talked endlessly about your Theory of Forms, where the virtues reside as universal perfections. In my understanding they reside with the gods.

SOCRATES: Goodness, Euthyphro, I am amazed you remember my discourse of a year ago! However, you still haven’t told me what holiness or goodness actually is.

EUTHYPHRO: I remember your Allegory of the Cave where you talk about true goodness being like the sun but that we humans live in semi darkness mistaking the shadows for reality.

SOCRATES: Again I am humbled by your memory and understanding. Please continue; tell me how we become the best people we can be.

EUTHYPHRO: Can I remind you of another person who sheds light on this subject as well as yourself Socrates?

EUTHYPHRO: Do you remember the wise lady Diotima?

SOCRATES: Of course. Are you going to tell me about her Ladder?

EUTHYPHRO: Yes, Diotima says that a young man should first of all love a person for their beauty. This is how most of us are attracted to each other isn’t it Socrates?

EUTHYPHRO: After a while, say a few years, the young man should realise that many other people are just as beautiful. He will ascend a few steps on Diotima’s Ladder.

SOCRATES: So, is the idea that he becomes less obsessed with his first love?

EUTHYPHRO: You could say that but really he must venerate wisdom above physical beauty.

SOCRATES: Yes, but this demands a complete change in how we usually view love.

EUTHYPHRO: Exactly, we must have an experienced guide at this stage on the ladder.

SOCRATES: So, tell me about the next few rungs of the ladder.

EUTHYPHRO: Next he should widen his love and appreciation to include animals, institutions, buildings and anything else in the world which is beautiful. In short he must learn not to take sense-experience as his main source of knowledge.

SOCRATES: Now we are getting to the crux of the matter. Please go on Euthyphro.

EUTHYPHRO: He must develop intellectual contemplation and leave behind likes and dislikes dependent upon sense experience.

SOCRATES: I am astonished once again at your understanding Euthyphro. And next?

EUTHYPHRO: Well, the culmination of his meditations is nothing short of a glimpse of the Eternal, Socrates. What he’ll see doesn’t come and go or cease to be and doesn’t increase or diminish.

SOCRATES: So starting off with worldly love he ascends from the things of this world until he can bear the brightness of the sun in our allegory Euthyphro?

SOCRATES: You mentioned a guide before. Who is this Guide?

EUTHYPHRO: We all remember you talking of your Daimon Socrates! It is the inner voice of conscience sent by the gods to be our guide in choosing right from wrong.

SOCRATES: Well said Euthyphro. So, the Daimon is the mediator between we humans and the gods. Is that what you mean?

EUTHYPHRO: This is what you yourself have said Socrates and Diotima agrees with you.

SOCRATES: I think we can sum up now. For us to be truly happy we have to live a virtuous life. We have to listen to our Daimon and cultivate contemplation of the Forms. The highest good is unchangeable (like the sun) and if we catch sight of it gold and clothing and good-looking youths will pale into insignificance beside it.

EUTHYPHRO: Well put Socrates. And what about rebirth? Do we come back again and again until we learn these lessons?

SOCRATES: I’m afraid Euthyphro, that question will have to wait for another day.