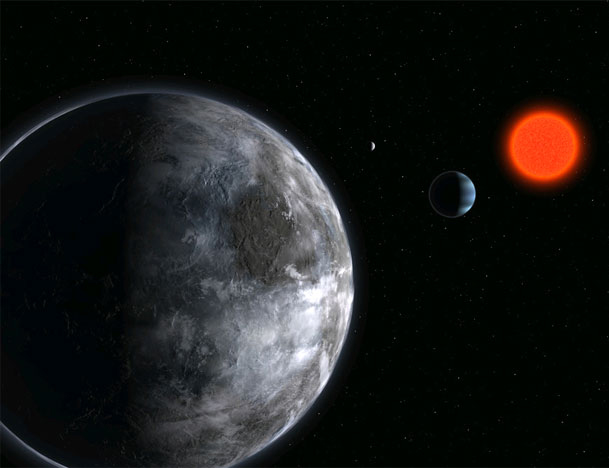 It has been the darling of science fiction; inhabited planets in other solar systems. I started reading SF in my teens and fondly remember the hard-sf of Arthur C Clarke and Isaac Asimov in particular. Has science fact finally caught up with SF?

All stars were formed out of huge swirling clouds of gas and it is surmised that most have planets orbiting them. Because of the glare of the host star it is impossible to see any planets directly. Our sun, for example, is 100x the diameter of the Earth so comparative size compounds the problem

Two of the indirect methods for finding exoplanets are The Transit Method and the Doppler/Radial Velocity Method.

In the Transit Method the faint dimming of a star is recorded as the planet orbits across the star relative to the observer. The occurrence of transits may be very infrequent and only last a short time so multiple data taken over months and years is required. The Hubble Space Telescope has been one of the telescopes used for transit recording. It is possible to determine the size of the planet with this method. The Kepler space telescope is another instrument which has found Earth-like planets and even planets orbiting binary star systems.

Stars called M-Dwarfs have been found too and they have a lower mass than our sun and a longer life so that there is potentially more time for biology to have developed. It has been estimated that these M-Dwarf stars could have five billion Earth-like planets.

The Transit Method relies on sensitive instrumentation so that a star dimming by as little as one percentage of the star’s light can be recorded.

The Doppler Method is possible because in any star-planetary system there is a common centre of gravity which causes the host star to ‘wobble’ around the centre of gravity. This wobble is too small to be seen directly so that is where the Doppler Shift comes in, recorded by special equipment. If the star is moving towards the observer ( that is; the telescope) the wave-lengths of light will be ‘bunched up’ or shifted towards the blue end of the spectrum. And if moving away, towards the red end of the spectrum.

If you imagine looking down on our solar system from ‘above’ there would be little movement of the planets towards or away from you. So, for this method to work the star system has to be observed in the equatorial plane which obviously will mean only a small percentage of all systems will be viable.

This ‘radial velocity’ method has been used by the Keck Telescope in Hawaii amongst other instruments looking for exoplanets. The method can be combined with the transit method and with the use of spectroscopy the composition of the planet can be roughly determined.

What about life on these exoplanets? It would seem incredible if ours was the only planet in the universe which has life! Through spectroscopy ‘biomarkers’ can be detected – that is, the gases which may be signs of life such as oxygen, carbon dioxide and water. The James Webb Telescope is the next space-telescope to search for exoplanets in the infra-red spectrum so watch out for news in the coming years.

Is the ‘Scientific Method’ Different in Astronomy?

The scientific method is common to all the sciences; however, in astronomy the ‘objects of study’ are often millions of light years distant!

The scientific method, per se, can be illustrated by considering how Galileo used his telescope in 1610. When he aimed it at Jupiter he saw four points of light, rather like stars, strung out in a line from the planet’s disc. Subsequent views showed the star-points in many different positions. Galileo then made a hypothesis to explain the data; he wrote that the objects were orbiting Jupiter and were in fact, moons. He calculated their orbits and predicted their motions.

Although astronomers cannot usually experiment on tangible substances in the laboratory (unlike chemists and biologists) they can, nevertheless, use instruments such as telescopes to make many thousands of observations and make hypotheses to explain the observations. The hypotheses can then be tested by predicting an event, for example, and confirming it. A large part of the method involves rejection or refinement of hypotheses once they have been found in error.

Astronomers nowadays use other types of telescope such as radio, infra red, X-ray – these advances have established that the universe is expanding and that what we can see visually with a telescope is only a fraction of the electromagnetic spectrum.

Spacecraft have landed on bodies such as our Moon. Instruments on board have been able to do experiments similar to those done by a chemist in a lab. Astronauts have also brought back rock samples from our Moon. Our knowledge of the origins of the solar system has thus increased by these more lab-based analyses. Probes have landed on Mars and other planets and sent back interesting data. For example, a small moon of Jupiter called, Enceladus, was found to have geysers containing sodium. Titan, a large moon of Saturn, has lakes and rivers of methane and ethane. These solar bodies are far from inactive and may even harbour primitive life.

Another huge area that has contributed to astronomical knowledge has been mathematics and its use in theoretical cosmology. Stretching from the Ancient Greek’s measurements of the Earth to Einstein’s Theory of Relativity and beyond – we can see how logic, calculation and measurement are embedded in the scientific method. Hipparcus (170-120 BCE ) even measured the length of the year with great accuracy – 365.2467 days, whereas the modern figure is 365.2422 days. A foundation for modern astronomy was laid with feats of calculation such as this.

In this respect – the use of mathematics and making theoretical models– astronomy is no different to the other sciences. And, of course, chemistry, physics, and even biology, play their parts in astronomy. Perhaps that suggests astronomy is the ‘mother’ of all the sciences.