the Santa Cruz Pupfish is extinct to be confirmed

the Western Black Rhinoceros no longer trundles across African plains

the Labrador Duck is extinct dead as a Dodo

the Javan Lapwing no longer flaps its wings in Indonesian skies

even our house sparrows are in the shit

there’s a sapient product of natural selection who

no longer holidays in the Bahamas or Thailand

no longer cultivates his own garden

no longer considers the categorical imperative

no longer gets the bullet train to work

no longer measures the rise in average temperature

no longer checks-in at the inter-city-airport Terminal

no longer rushes home to watch the World Cup

no longer develops a military capability second to none

no longer does the school run before nine o’clock

no longer views the Holocaust exhibit of discarded shoes

no longer does the night shift on the maternity ward

no longer tackles the problem of social isolation among the elderly

no longer formulates any messages of reconciliation or peace

no longer takes the dog for a walk in the park

no longer speculates what it is like to be a bat

no longer puts flowers on the family headstone

Note: It is frightening but true: Our planet is now in the midst of its sixth mass extinction of plants and animals — the sixth wave of extinctions in the past half-billion years. We’re currently experiencing the worst spate of species die-offs since the loss of the dinosaurs 65 million years ago. Although extinction is a natural phenomenon, it occurs at a natural “background” rate of about one to five species per year. Scientists estimate we’re now losing species at 1,000 to 10,000 times the background rate, with literally dozens going extinct every day [1]. It could be a scary future indeed, with as many as 30 to 50 percent of all species possibly heading toward extinction by mid-century. 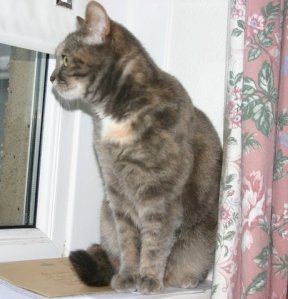 The prompt from Haiku Horizons blog is ‘cat.’ Traditionally haiku  references the seasons and has 17 syllables but the syllable count is pretty flexible when writing in English. And there are many modern haiku that have nothing to do with seasons! There should be a change of direction, a turning point in each haiku, usually at the last line.

I have punned on the word ‘pause’ here but not sure if it works. The slo-mo is referring to those nature programmes which slow the movement of an animal down to extremes.

onto the window sill

Shibdon Pond is a reedbed pond four miles from where I live. In the summer common terns nest here and in the winter large flocks of waders congregate and feed. This week there have been hundreds of lapwing, four common sandpiper, six- eight black-tailed godwit, gadwell, redshanks, one juvenile dunlin, seven (visible) snipe and of course grey herons, cormorants, gulls and mallard. It is a place you never tire of visiting and it is only a mile or two from one of the biggest shopping centres in Europe, the dreaded Metro Centre!

A friend kindly gave me a telescope for my birthday and this has opened up another dimension (literally) to my birdwatching. If you have children who are interested in wildlife you can’t start too early; don’t give them toy binoculars or telescopes! Get them good quality optics and they will thank you for it!

in the still water

shimmering in the still mirror

I recognised you from your song
long before I saw you in the apple tree.
Each day a cycle of clicks, twangs, bell-notes,
and chuckles. No mate flew to your trembling
throat. On the sixth day I saw you flit from branch
to branch in the shadow of leaves, then you were
gone – but your endless song brought me back
to praise you again and again.

Alchemist from Africa! Your gold
is quick-silvery song – your name –
our way of transmutation –
of speaking in tongues.

Note: Nightingale: Obviously ‘nightsinger’ but Gala also from Old Norse meaning song, merriment, yell, of air. In my poem I’ve alluded to the musicality of the nightingale’s song and the evolution of language.

Here’s the front cover of the booklet published to celebrate George Stephenson’s locomotive Blucher, which hauled coals to the staithes on the river Tyne. Blucher was built in 1814 and made Stephenson’s name. Along with his son Robert he developed the steam locomotive and the first public railway – the Stockton and Darlington railway -was built in 1825. The Robert Stephenson & Company in Newcastle Upon Tyne was the world’s first locomotive builder.

Here’s a drawing I did for the booklet. Thomas Bewick was a Northumbrian wood engraver who printed books of British fauna. I wanted to symbolise the remorseless eclipse of the agrarian society by the Industrial Revolution. The fox weaving in and out of the tunnel is based on a drawing of Bewick’s. 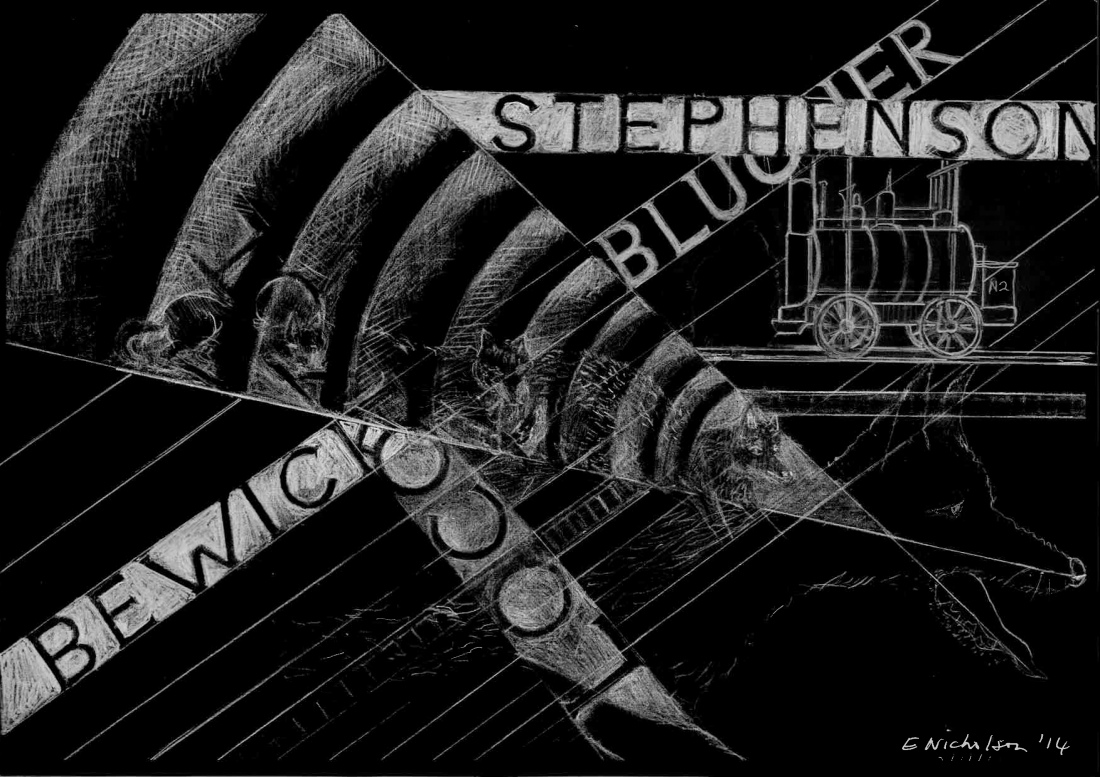 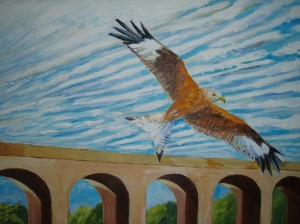 I went to a poetry workshop yesterday – the theme was nature. One of the exercises was to include a man-made structure, an animal and time.  I wrote this poem and this is one of my paintings I did a few years ago.

The viaduct floating
in early morning mist.
A single figure with a dog
emerges from the drowned
stones. A staccato of barks
echoes under arches.
A thrush sings his three
time song, sudden wing of
burnt sienna – red kite towing
summer sun.

When I visit friends in France one of the highlights is watching nightjars gliding mysteriously over the fields at dusk and in darkness. They are a bird of myth and one belief was that they sucked on the teats of goats!