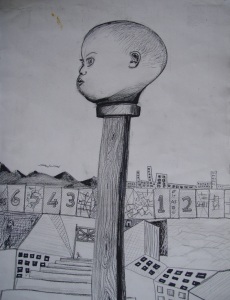 We by Yevgeny Zamyatin is a remarkable dystopian novel published in 1921. It is a chilling narrative about control and collectivism and more subtle that Orwell’s 1984. The language (in translation) is curiously poetic and the imagery is surreal. Will Self in his Introduction to the Vintage edition talks about the ‘stuttering enjambments . . agonies of elipsis’  and ‘daring synasthesia’ of the narrative style. The protaganist does not even have a name – he is simply D503. I have tried to convey something of this nightmarish vision in this prose poem.

A MESOSTIC is like an acrostic except the vertical text runs down the middle of the main text.

====descending from Skies – a new saviour

I had to use the odd formating to try to get the vertical text to line up!

The drawing is my own.