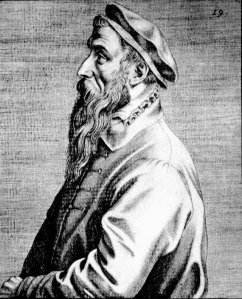 Most people have admired the widely reproduced paintings of Bruegel the Elder. Paintings such as Children’s Games have even been made into jigsaw puzzles. However, his worldview and naturalistic style are no longer in favour so much. This is a pity as I believe his paintings and drawings still have much to say to us.
In 16th century Netherlands proverbs which illustrated the vices and foibles of humanity were popular. And this is our main stumbling block. Nowadays we don’t like being told what to think, let alone how to live! Some of the proverbs of Bruegel’s day may seem quaint to us but I’d argue that his broader worldview has a timeless quality more akin to Shakespeare’s view of humanity. In particular the notion of Theatrum Mundi (Theatre of the World), in which all human life is seen as an absurd spectacle acted out on a vast stage, is a view just as appealing today as in the 16th century.
In a short article it is impossible to do justice to Bruegel’s fecund imagination and vision. I’m only going to discuss two of his small drawings but would urge those interested to carefully examine in particular such works as Netherlandish Proverbs, Allegory of Pride, Allegory of Lust, Allegory of Avarice and Battle Between Carnival & Lent.

Bruegel’s countrymen and women were well aware of the moral temptations of a commercial society, particularly where greed and selfishness were concerned. Folk theatre of the age dramatized such follies. Elck was a sort of Everyman figure popular at the time. Elck’s spiritual blindness is depicted in a drawing of Bruegel’s done in 1558. In this exquisitely detailed 8×11 inch drawing an elderly man searches through a pile of barrels, tools, a chessboard and other objects – all of which represent the distractions of the world and the danger of too much ambition and insatiable greed. The broken globe at Elck’s feet is a traditional symbol of vanity. The drawing illustrates two sayings, Elck seeks himself in the world, and Elck tugs the longest end. This latter is depicted by two figures tugging on a strip of cloth. Elck’s lack of awareness is further illustrated by a picture hanging in the background. A fool gazes at his image in a mirror. He is Nemo or Nobody, another popular folk character. The inscription below translates as, Nobody Knows Himself. Pageants of the day portrayed Elck in a series of tableaux and moreover, the saying, Elck seeks himself and comes to grief because he cannot judge himself clearly, was one of the tableaux. Here we are far from quaint proverbs; we are more in the spiritual and psychological realm of Socrates’ Know Thyself. 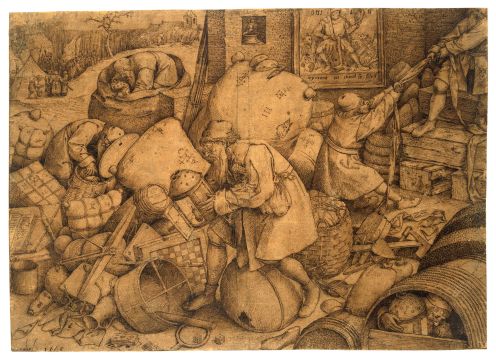 The Alchemist (12×17 in) is another drawing done in the same year. Alchemists were held in low esteem by the Netherlands’ increasingly rational, humanist intelligentsia and merchants. Stories circulated about people being fleeced and losing life savings. 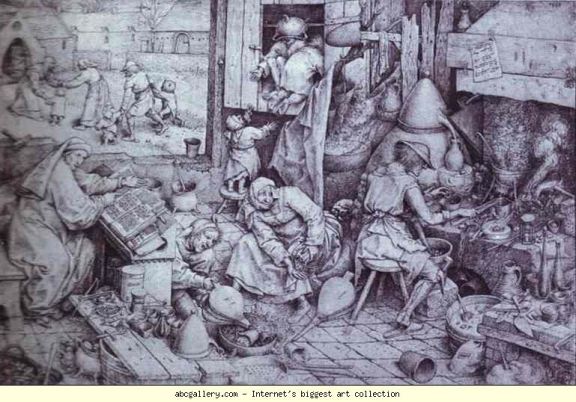 The drawing depicts an ill-clothed alchemist seated at his ‘laboratory’ bench; his wife sits behind him pointing to her empty purse showing that in spite of her husband’s occupation, it is not a money-spinner! Her child sits in a cupboard with an empty cooking pot on its head, further evidence that the family is trading in nothingness. A scholar sits at a desk and tells a fool to pump bellows on a charcoal burner. The learned man points to an entry in his large book which is a pun on the word, ‘alchemist’- all is lost! Through an opening in the back of the room we see the alchemist taking his family to a poorhouse. Exposing fraudulent merchants and enterprises was a popular pursuit in Europe. Today we see the same appetite for ridicule in expose-journalism and the satirical cartoons depicting politicians and celebrities. Also, although there are no alchemists around nowadays, all we have to do is switch on the TV to see yet another scam where someone has fleeced someone else out of thousands (or millions) of pounds. And there are many more kinds of exploitation nowadays where gullibility is involved.
In this short article I have focussed on the message or ‘moral’ of these two drawings as if they were literary forms instead of visual. I think it goes without saying that Bruegel shows his many draughtsmanship and compositional skills in these pictures; skills which would serve him well in his later paintings. (There are, of course, many other qualities to admire in Bruegel, his use of striking composition and colour for example. He was no mere moralist.) It must be remembered that he was working at a time when narrative and literary ideas figured strongly in paintings, etchings and prints.
It is a cliché that human nature never changes. I think that is why Bruegel’s work can still resonate today if we make the effort to really look. We may not know whether to laugh or cry at the world’s follies (Democritus was the optimist in the ancient world and Heraclitus the pessimist!) Perhaps there is a third choice; to see ourselves in the Theatre Mundi, to have compassion for ourselves and others, and live the best we can without causing too much mayhem.
In case it is thought that Bruegel was an out and out pessimist focussing on vice rather than virtue, he did depict The Seven Virtues too, and I should emphasise that his work, above all, celebrates life in all its richness, humanity and folly.
I would recommend using a magnifying glass to examine Bruegel’s work reproduced in books. If you are fortunate to see the originals you could always go armed with a magnifying glass! (I’m sure in Bruegel’s day people would spend considerable time ‘reading’ his paintings. In our world of instant-sensation we may spend a few minutes in front of a painting in a gallery if we are lucky.)
I am indebted to Walter S Gibson for the light he sheds on Bruegel in his excellent Thames & Hudson book, Bruegel, published in 1977.