Just what is it that makes today’s homes so different, so appealing? 26 x 25cm, Richard Hamilton, 1956, Tubingen. 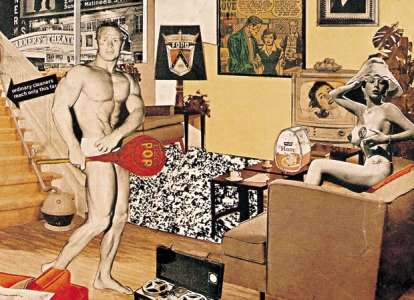 This very small collage ostensibly showing a muscle-bound man and a pin-up girl with sequinned breasts is usually thought of as representative of Pop Art but it also bears some influence of Dada with its photo-montage. It was exhibited in 1956, in an exhibition in London called, This is Tomorrow.

British artist, Hamilton selected images from magazines which represented different aspects of modernity – tape recorder, vacuum cleaner, television, cinema, pornography and so on. Many art commentators think that the artist was approving of consumerism but surely he was being at least slightly tongue-in-cheek, especially with the title? Be that as it may we can certainly consider it in an ironic light; what can it tell us about the values and drawbacks of consumerism? First of all, let’s take as given the many advantages of living in a consumer society compared with living in, say, 1800.

Let’s start with the collage, then, and investigate what is actually there. Firstly, are there any signs of actual human beings anywhere? I hope you’ve answered in the negative! Both simulacrums of humans are commodities – the man from a men’s health magazine and the woman from a girlie magazine. Is that a lamp shade she’s wearing? If so, more evidence of Hamilton’s humour and irony. I’ve also read that the two figures could represent a modern Adam and Eve surrounded by modern temptations!

Oops, sorry, there is a woman using a vacuum cleaner at the top of the stairs. But, wait; isn’t she a role-figure, a stereotype, a housewife, and therefore not a living flesh and blood human. Perhaps she is an android like the housewives in The Stepford Wives? You see how Hamilton’s world is slipping remorselessly into unreality? What else can we see? There is a tin of ham on a coffee table. The single item which isn’t manufactured is a plant behind the pin-up figure. Everything else comes from a factory assembly line whether it is made from wood, leather, nylon or plastic.

So much has been written about the ills of consumerism that it is difficult to know what else to say. Perhaps I should take a hint from Hamilton’s collage and collage a few random, but relevant, ideas together.

Shall I go on? I haven’t even mentioned climate change!

Some of these collage items are obviously symptoms of something going radically wrong but I’d like to consider chiefly how our consciousness may have changed for the worse, mainly due to consumerism.

It is often said that consumerism has lead to a commodification of life. We are so used to paying for goods that we take the ‘transaction model’ unconsciously into areas such as personal relationships. We see everything in terms of how much satisfaction can be obtained, rather like in Mick Jagger’s song, although he actually is giving it a negative spin so his is more akin to the Buddhist view. It is as if consumerism has put the finishing touches to our view of ourselves as separate egocentric beings facing the world to see what we can get to our advantage. No wonder alienation is the defining characteristic of modernity.

It is important to realise that the problem here is not merely with the accumulation of material goods; it is also to do with psychological ‘goods’ – my status, my success, my relationships, my career. Investment in such concerns takes up an extraordinary amount of time and effort and they are perhaps more difficult to let go of than to let go of material goods. I am not suggesting that we all become hermits, only that we can shift our reasons for being alive from ‘what’s in it for me?’ to ‘what is good to do in these particular circumstances?’ And ‘am I ceasing from causing harm in my speech, thought and actions?’ The bottom line, according to Buddhism, is that egocentric craving is the cause of our mental dis-ease. The opposite of craving is ‘aversion’ – a hatred of something; wanting things to be different to how they are. If we can change something for the better, all well and good. But often, things have endless multiple causes so we are better accepting that we cannot influence those situations very much, if at all.

Buddhism’s idea of anatta can be translated as no-self. We believe there is no such thing as a self or soul which is unchanging. This conclusion is corroborated by some neurological and psychological experiments. In Bruce Hood’s very readable The Self Illusion, after he has spent over a hundred pages describing such experiments he writes:

These studies reveal that the vast body of evidence undermines the notion of a core self, but rather supports the self illusion. If we are so susceptible to group pressure, subtle priming cues, stereotyping and culturally cuing, then the notion of a true, unyielding ego self cannot be sustained.

Needless to say, most of us rebel in the face of such conclusions. We like to think we are very much an individual with strong character thank you very much!

Hood goes on to describe an extraordinary case from the tragedy of 9/11. Tania Head had been on the 78th floor of the South Tower when flight 175 slammed into the building. She was badly burned by aviation fuel but managed to crawl to the stairs and climb down. She even encountered a dying man who managed to give her his wedding ring. She was eventually rescued by a fireman who himself lost his life by returning to the burning tower. Tania’s fiancé was in the other tower and she later learned he had died. Like other survivors Tania felt afterwards she needed to do something to deal with her own emotional turmoil and that of others. In spite of being disfigured she set up a survivor’s group and championed the group’s right to visit Ground Zero. She became a figurehead and a symbol of the human spirit . . . the only problem was that she had never been in the Tower. It was all a lie!

What has this to do with consumerism? Poor Tania Head felt so alienated from society that she had to create herself like Walter Mitty. We all have our life-narratives but if the evidence in Hood’s book is anything to go by even they are pure fiction! I would suggest that our consumer society has exacerbated this need to create and promote our fictional stories, perhaps because we feel so much adrift compared to ages where religious faith provided meaning. And I’m convinced that we have lost a connection with the rest of nature by abandoning rural life and moving into cities. That was the warning of the Romantics and there are many strands to it, even now some of the consequences of urbanisation are unrecognised and need to be investigated further.

However there is a ‘positive’ side to the doctrine of anatta or no-self. If our selves are ‘self-invented’ and we can be self-aware, we should be able to allow for our conditioning and prejudices and hence be more peaceable and non-confrontational. Also, this view does not go against having distinct personalities. We are not saying that Jones doesn’t have an earthy sense of humour, that Smith isn’t quick-witted! We can still contribute to the common good through our personalities. But we no longer have to feel threatened by others or indulge in one-upmanship. And perhaps, we may even begin to put Gandhi’s statement into action: there is enough for everyone’s need, but not for everyone’s greed.

Here is a link to the exhibition of the cut outs that Matisse did at the end of his life.
“http://www.tate.org.uk/whats-on/tate-modern/exhibition/henri-matisse-cut-outs&#8221;
You can watch a video about him on my blog. After the short video of him doing the cut outs there is a longer art documentary you can click on.

I wrote this poem after visiting the Oak Effect exhibit by Mathew Darbyshire in the Shipley Art Gallery in Gateshead. The exhibit ‘presents a 2 bedroom show home made to EU recommended standards with ubiquitous oak effect finish.’ Various old artifacts are displayed within the rooms. Hence the juxtaposition of the new and old; and artifacts taken out of their usual context. I didn’t notice the carving of Shakespeare the first time I visited! Its by Gerrard Robinson.

I walk into the art gallery and see
William Shakespeare
carved in wood.
Oak leaves form a sort of halo
around his eight inch figure.
Evidence of his seven ages
is all around:
1. Infant – a wooden African cradle
2. School pupil – a 1930s desk
3. Lover – a 1920s gramophone complete with shellac 78
4. Soldier – a spear from New Guinea
5. Maturity – a Burmese Buddha
6. Old age – an abacus
7. Death – a faceless long-case clock

Falstaff is nearby to ensure we don’t dwell
too much on ‘mere oblivion.’

On the wall behind Shakespeare
there is a chorus of birds, painted in oils on copper

by Jan van Kessel around 1650.
Polychromatic parrots, parakeets and hoopoes sing
from a little song-sheet.
Is this a coda, an afterthought afterlife or
is this how it always is? 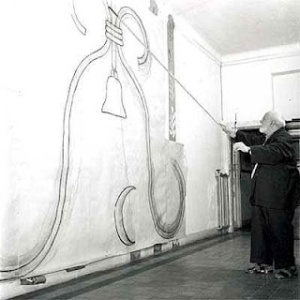 “When we speak of nature it is wrong to forget that we ourselves are part of Nature. We ought to view ourselves with the same curiosity and openness with which we study a tree, the sky or a thought, because we too are linked to the entire universe.”

In his old age Matisse used charcoal on the ends of long poles to draw with. He also used coloured paper to make pictures, cutting shapes with large scissors even when he was bed-ridden.

I went to an art gallery recently and bought an old exhibition catalogue titled Munch & Photography. (cost £1!) Munch used a camera and based some of his paintings on the photographs. He also got some strange effects with double exposures and with people moving on a long exposure.

Munch is of course the supreme artist of alienation – not many of his paintings are uplifting, or at least not many have the exuberance of colour and energy of, say, Van Gogh’s. They do however reflect the existential awareness of the modern era and Munch was among the first artists to do this. His first paintings were done in the 1880s.

I thought I’d try a series of poems triggered by his paintings. Here’s the first two. I’d welcome feedback as I’m not sure about continuing! There’s a good blog about art history here:

Self Portrait between Clock and Bed 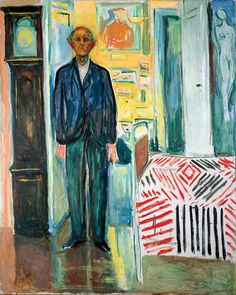 The old artist stands between

a clock and a bed;

cover the walls, plastering over

The artist’s face is gaunt and

the clock-face is painted out.

the mantelpiece as Munch

See a foggy figure behind

the bed: an ectoplasmic blur

toward the weeping girl