This is a painting I did on cardboard, using acrylic, some years ago. It is quite small, less than 12inch across. Looking at it now I’m surprised I chose black for the red kite! I don’t want to read too much into it but it was painted as an expressionistic non-naturalistic landscape, so perhaps the archetype of the Shadow is part of the symbolism.

The reason I’m posting some of my art work is that I have a pile of stuff gathering dust so I took photos of the best of the bunch and will post them occasionally on this blog. I no longer paint and thought up until now that was a part of my past; I would no longer pick up a brush. However, never say never, as they say! (The Blucher drawing was done this year but that’s a pencil drawing not a painting.) 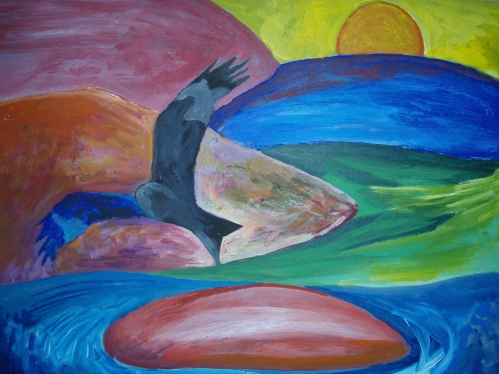 I went to a poetry workshop yesterday – the theme was nature. One of the exercises was to include a man-made structure, an animal and time.  I wrote this poem and this is one of my paintings I did a few years ago.

The viaduct floating
in early morning mist.
A single figure with a dog
emerges from the drowned
stones. A staccato of barks
echoes under arches.
A thrush sings his three
time song, sudden wing of
burnt sienna – red kite towing
summer sun.

I’m working on a longer eco-poem about red kites. In the meantime this one was inspired by one of Ted Hughes’ where he personifies/anthropomorphises a hawk.

I sit on a strut of a pylon,

on top of a hill,

we scavenge for corpses; bits

and pieces of flesh.

This is our life most days.

It took a billion years

to perfect my amber eyes,

and my scavenging ways.