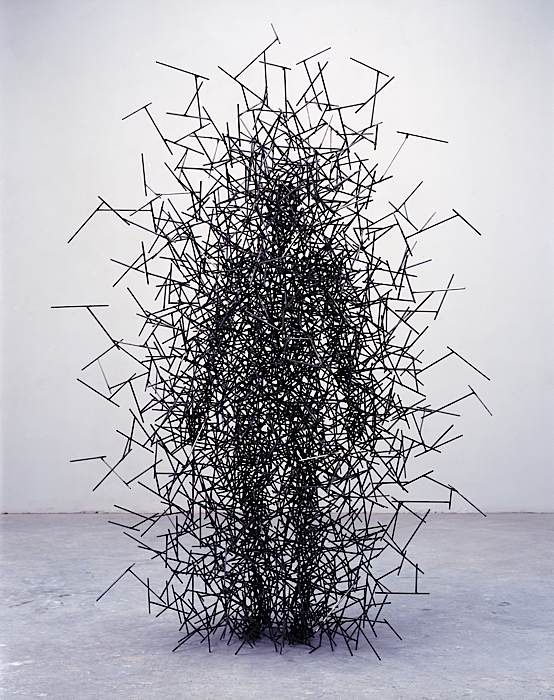 This is longer version of an essay I wrote for an online course about Modern Art. The artists I contrast Gormley with are ones included in the course.

Anthony Gormley came to fame with his Angel of the North which stands a few miles from where I live!

Anthony Gormley uses his own body in many of his works, such as the Angel, but he is insistent that his work is not about individual identity. Unlike artists such as Shahzia Sikander or Faith Ringgold, he is not interested in ethnicity or nationality. His concerns are more universal and even metaphysical. In an interview he even refers to himself in this way:

It hasn’t got anything to do with autobiography. I am a metaphysician. In other words, I’m trying to read the physical or find ways of reading the physical in order to find something hidden.

Gormley was educated by Catholic monks and although he is not a practising Christian he recognises a spiritual dimension to life – for example he meditates. This ‘something hidden’ which he refers to can be thought of as the spiritual, the ineffable, the numinous, or any aspect of human life which cannot be measured. It also includes the metaphorical/poetic stance in opposition to the literal-minded or what William Blake referred to as Single-Vision.

In the Quantum Cloud series he uses thousands of metal struts in a three-dimensional arrangement. The human forms within the ‘clouds’ are only revealed when the viewer walks round the cloud and different sight-lines suddenly form a figure. The viewer is therefore co-producer of the work of art. As Gormley says:

The act of looking is the act of making the thing that you’re looking at. You actually have to find it.  It’s a process.

Of course, this is how all perception works; inside our skulls a neurological process occurs whereby the brain selects and builds up a picture of ‘reality’ from constant sensory input. What, I believe  Gormley is doing is drawing attention to that fact. He is very much interested in metaphysical questions such as “What is time?” and “What is it like to be a human being?” and “Is knowledge limited to sensory information?” These kinds of questions are apolitical – the idea of Gormley producing an overtly political work, such as those made by Martha Rosler or Jacob Lawrence for example, is unthinkable, if not laughable.

Gormley himself is fully aware of the irony of attempting to suggest the numinous in such a ‘solid’ medium as sculpture. Nevertheless, as we inhabit solid bodies in a seemingly solid world there is not a contradiction in his aims. The Quantum series, especially, more than hints at the atomic-particle reality underlying our usual experience of a solid world.

All of the mystical traditions agree about one thing: that the ‘skin encapsulated ego’ is a kind of self-illusion. In the genuine mystical experience there is no separation between self and the world. Many traditions also talk of an energy body apart from the physical body. Perhaps the clouds of steel bars convey this idea rather well.

Gormley is one of the few artists today who explores the ‘eternal verities’. While other artists pursue political agendas or explore identity and subjective experiences, Gormley seems to return to the very origins of art. Recently, in a television documentary, he is shown looking at hand-prints in a cave. They are some of the first images made by humankind and Gormley is overwhelmed by them. He talks, in hushed tones, about the miracle of spiritual communication stretching from thousands of years ago to the present time. These prehistoric artists used their bodies to make art in a very tactile, direct way; it is little wonder that Gormley was so moved.