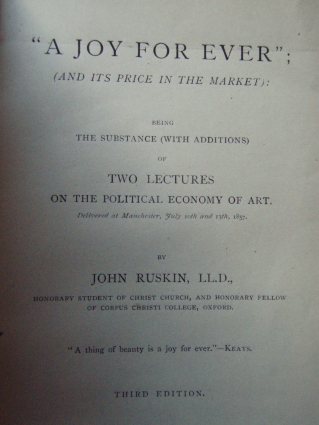 I like coming across books by chance. This is one such: a copy of John Ruskin’s A Joy Forever, bought for £1 in an Amnesty bookshop. It is an edited transcription of a series of talks he gave in Manchester about the economics of art and about art education. The talks were given in 1857 and there are five essays in total in the book.

The collection is a fascinating mixture of Utopianism, moral aestheticism, dogmatism and naivety. Ruskin is worth reading today in order to mine the nuggets of gold from the occasional dross. Apart from anything else he is a master-stylist of the essay form.

Ruskin is a typical Victorian and takes an elitist, moral view of art. He believes in an aesthetic ‘gold standard’ – that certain works of art stand head and shoulders above others. Contrast that with today’s relativistic, ‘anything goes’ view of art. Postmodernism has abandoned the gold standard: the high priests of post modernism maintain there is no qualitative difference between Leonardo’s Virgin of the Rocks and Andy Warhol’s Marilyn Monroe. High culture and low culture are anathema in the current art lexical.

There is, for example, no self-evident reason why Bach should be seen as better than Bacharaach. This is not necessarily to say that they are the same, just that they are equal. Everything swims in the same social sea of signs, images and meanings. [ Teach Yourself Postmodernism, 1997.]

I don’t want to get bogged down in too much of a criticism of postmodernism, but I should confess that I find it difficult to jettison the gold standard completely. At the same time I can also see the value of originality and experimentation.

It is tempting to simplify Ruskin and write him off as a hyper-conservative critic, out of touch with modernity. He famously dismissed Whistler’s Nocturne in Black and Gold, accusing him of ‘flinging a pot of paint in the public’s face.’ At the same time he championed JMW Turner and the Pre-Raphaelites.

In this Introduction I want to argue that many of Ruskin’s ideas are worthy and still relevant today.

In his first essay, The Discovery and Application of Art, Ruskin considers how a society nurtures and encourages its young artists, how artists are employed and how works of art are distributed and displayed. I will bypass his main explorations and merely give a few examples of his general view of art and artists to see if they are still relevant today.

I will start with a quote which many may dismiss as encapsulating an archaic, obsolete view of art:

Now, no branch of art economy is more important than that of making the intellect at your disposal pure as well as powerful; so that it may always gather for you the sweetest and fairest things. The same quality of labour. . . will produce a lovely and useful work or a base and hurtful one. . . its chief and final value, to any nation, depends upon its being able to exalt and refine, as well as to please; and that the picture which most truly deserves the name of art-treasure is that which has been painted by a good man.

The notion that art is in any way morally uplifting has been cast into the dustbin of postmodernism. Yet the question of moral influence goes back to Plato and his somewhat draconian expulsion of poets from his Republic. Nearer to our own times, the Romantics championed moral purpose, Wordsworth even seeing moral instruction in nature.

Most of is will baulk at Ruskin’s reference to the morality of the artist – that art should be the product of a ‘good man.’ I will consider this point in a moment.

If we no longer expect artists to take the moral high ground, we are more comfortable with the notion of moral indignation in the service of social justice. The feminist and political stances of Kinda Kahlo and Kara Walker, respectively, are cases in point. Such artists go against the tide of postmodern rejection of moral commitment.

Now, is it possible to defend Ruskin’s view of the ‘morally good’ artist? It would seem, on the face of it, naive and idealistic. Artists such as Francis Bacon and Gauguin were not paragons of virtue but produced works of lasting quality. However, we could be generous to Ruskin, and interpret the idea of morality in broader terms of the artist being morally engaged, and, above all, being self-aware and committed to ‘self-overcoming’ – to use a phrase from Nietzsche.

William Blake comes immediately to mind in this respect. His whole oeuvre is the result of self-overcoming – in his words, ‘cleansing the doors of perception’ and seeing the sacred in everything. [‘Everything that lives is holy.] He demands in himself, as well as us, nothing less than a perceptual, spiritual and moral transformation. [If you wish to examine in detail his view of human potential I recommend studying his Illustrations of the Book of Job. When I say examine, I mean studying his engravings with a magnifying glass and reading a good commentary such as Joseph Wicksteed’s Blake’s Vision of the Book of Job. Probably you will only appreciate the depth of his vision if you are prepared to spend many hours, days and weeks on this work!]

Idealism in art and politics is seen as naive and is often contrasted with empiricism and practicality. However, if we are to avoid a climate-induced apocalypse we all need the imagination and moral commitment to leave behind our infantile greed, violence and rape of the planet. We need to put into practice the principles of non-violence [ Ahisma, meaning ‘not to injure.’] and cooperation, and become true stewards of the planet, nurturing eco-systems instead of denuding them. This will most likely see the abandonment of capitalism in its present form and the abandonment of the insane doctrine of run-away economic growth. What has this to do with art? Art has always been both a product of the times and questioned its own times. Need I say more?

Here, to end, is Ruskin’s eloquent denunciation of our destruction of cultural artefacts as a result of war and indifference:

Fancy what Europe would be now, if the delicate statues and temples of the Greeks – if the broad roads and the massy walls of the Romans. . . had not been ground to dust by mere human rage. You talk of the scythe of Time, and the tooth of Time: I tell you, Time is scytheless and toothless; it is we who gnaw like the worm – we who smite like the scythe. It is ourselves who abolish – ourselves who consume; we are the mildew, and the flame; and the soul of man is to its own work as the moth when it frets when it cannot fly, and as the hidden flame that blasts where it cannot illuminate. All these lost treasures of human intellect have been wholly destroyed by human industry of destruction; the marble would have stood its two thousand years; but we have ground it to powder, and mixed it with our own ashes.

In my next blog I will look in more detail at what Ruskin has to say about art education.

4 thoughts on “Ruskin & the Moral View of Art”