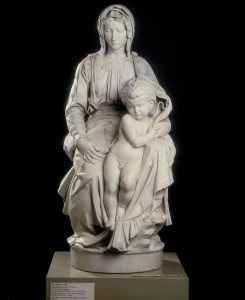 Madonna of Bruges by Michelangelo

During WW2 the Nazis set up special departments for the seizure and storage of objects of cultural value. They plundered hundreds of thousands of works of art; from Germany, France, Russia and Belgium and other countries. Many were destroyed. They also destroyed thousands of Synagogues, Catholic churches and Russian Orthodox churches.

The Monuments Men was a group of international volunteers from public art services. There were over 300 members drawn from the Monuments Fine Arts and Archives organisation. How many of these were actively involved in recovering works of art during the war, I’m not sure. In any case, the film, The Monuments Men, focusses on a small group of only 7 men charged with recovering works towards the end of WW2. Much more work in this recovery process was done after the war ended, in the following years.

More information can be found on:

I went to see the film last evening. It told the story well enough but I’d have preferred less ‘Hollywood’ sheen. There were the clichéd bits of dialogue too- you could almost hear the American constitution being recited in the background.  Given the context of the war setting, there was a surprising lack of plot tension.

The occasional voice-over narration sounded dated. The scenes of the paintings and sculptures hidden in the various mines were among the best. The statistics about how many works of art were destroyed, as well as recovered, were staggering.

The film is worth seeing just for the story: I’m sure the book on which it’s based would be worth reading. (Monuments Men, by Robert M Edsel)